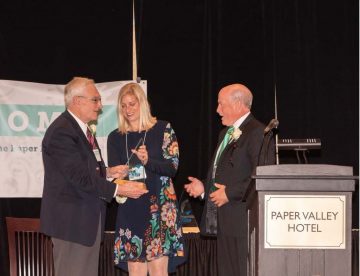 Richard Kerekes,  Professor Emeritus in UBC’s Chemical and Biological Engineering Department,  was inducted into the Paper Industry International Hall of Fame in Appleton, Wisconsin, USA on October 4, 2018. The award was granted in recognition of his preeminent academic and research contributions to  the paper industry.

Richard J. Kerekes received his BASc. (1963) and MASc (1965) in Mechanical Engineering from the University of Toronto  and his Ph.D. (1970) in Chemical Engineering from McGill University. He joined the Pulp and Paper Research Institute of Canada (Paprican) in 1971. In 1978, Dr. Kerekes was appointed an Honorary Professor in Chemical Engineering at UBC where he initiated the co-operative post-graduate program between Paprican and UBC. He was the founding Director of the UBC Pulp and Paper Centre, leading it from its inception in 1986, until his retirement in 2005.  In 2001, he was appointed the first Paprican Professor of Pulp and Paper Engineering at UBC. Upon retirement, he served as Director of PAPIER, an organization of Canadian university academics involved in pulp and paper research. He also served as Associate Scientific Editor of the Journal of Pulp and Paper Science from 1984–93.

Dr. Kerekes has received numerous awards for his educational and research contributions,  including the  Beloit Award of the Engineering Division of TAPPI (1997),  TAPPI  Research & Development W.H.Aiken Prize (2004),  Johannes van den Akker Prize for best paper in paper physics (2007 and 2009). He was  elected fellow of TAPPI, PAPTAC,  IAWS, and the  Canadian Academy of Engineering. In 1999, Prof Kerekes was awarded the John S. Bates Memorial Gold Medal of PAPTAC and in 2010 the TAPPI Gunnar Nicholson Gold Medal.

The Paper International Hall of Fame, founded in 1992, has honoured and recognized a total of 135 giants of the paper industry from around the world whose accomplishments have truly revolutionized civilization.